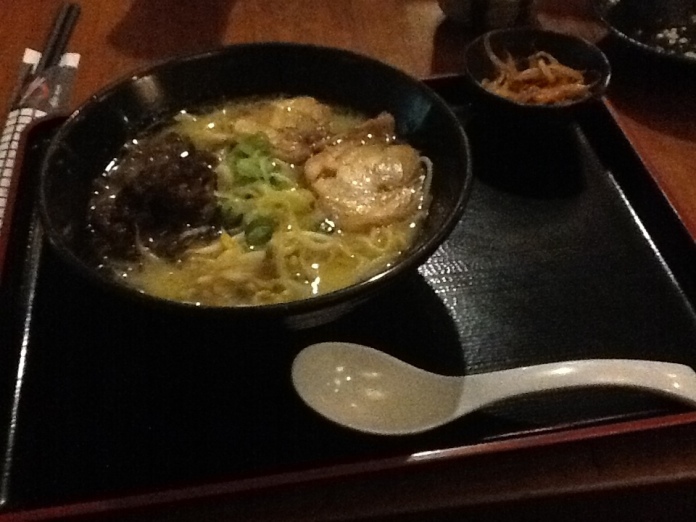 When in a new place, I make an effort to try something new. For example, when traveling to a new place, I would veer off the familiar, and try local food. This is the reason why I rarely go to a Starbucks, McDonald’s, or any of the well known global brand when visiting a city. I would look for a local restaurant or local coffee house for a different taste.

Like this bowl of ramen that I just had for dinner. I’ve been wanting to try the restaurant for a long time, but didn’t get the opportunity to do so until now. And even then, the reason that I finally chose this ramen house was because other places were full with saturday-nighters. Even then, I was so glad that I ate here because the ramen, especially its broth, was exceptionally rich and delicious.

Trying new food can really widen your horizon. Before I visited Seoul, I had reservations regarding Korean food. I heard about kimchi, bibimbap, and I’ve seen some korean specialty restaurants in Jakarta, but I barely had the interest to try one. And after three bibimbaps in three different occasions (two of them as airline meals), now I look at Korean restaurants with a curious, almost a longing, attitude.

Imagine what trying an entirely different experience and meeting new people can do.

I remember the first time I held a live firework tube in my hand. Before that, whenever I wanted to light a firework, I would put the tube against a solid thing, like a brick or a flower pot, lit the fuse, and ran to safety. Until one new year’s eve someone (I truly forgot who it was, but I must say I’m thankful for the forceful persuasion from the person) told me to lit the fuse, hold it high above my head, and aim it at an empty part of the sky that was free from electric lines and trees. I counted each blast with a racing heart, fearing that the next one would explode in my face. After the final fire, I found that I was still alive and unscathed. I stopped fearing firework since that day.

Mark Twain, the famous author of The Adventures of Tom Sawyer once said, “Do the thing that you fear most, and the death of fear is certain.” Dale Carnegie, the bestseller author of How To Win Friends and Influence People said, “If you want to conquer fear, don’t sit home and think about it. Go out and get busy.”

I think would count anyone as fortunate if he could spend each day to conquer one thing that he fears. The more fear we defeat, the wider the boundaries of our lives become. And one day, our lives may become simply boundless with possibilities.